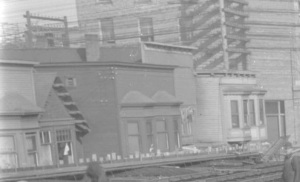 Shore Street was just a short bit of road on the west side of Main Street that disappeared when the Georgia Viaduct was constructed in 1914. Here the tops of a house and a couple of rooming houses poke above the northern edge of the deck of the new viaduct.

The street gained notoriety when the police department closed the majority of the brothels on Dupont (Pender Street) and over time the women found a home on Shore Street, though not for long. Businesses on Main Street complained of the long lines of men waiting to visit a brothel. The manager of the Avenue Theatre called on the police to do something because of crowds of more than 50 men milling about.

Eventually, the women with the cooperation of the police moved over to the 600 and 700 block of Alexander Street. And Shore Street soon vanished.

2 thoughts on “A Bit of a View of Shore Street”