When I originally wrote this post it was about my father, Peter who died in October 2018. This past week my mum, Donna died, somewhat unexpectedly after suffering a fall. My brother and sister and I were all in Victoria and we able to spend time and say good bye.

Both parents were influential in our lives, as parents are, but the three of us think we were pretty lucky with the ones we got. The hardest pieces of writing I’ve done has to be crafting the obituaries for both of my parents.

Peter: Sitting in my office I am surrounded by books and objects I’ve acquired over the years, many of them from my dad’s bookcase. There are lettering manuals for shopfronts, urban design and architecture books collected when he worked for the City of Victoria’s Special Projects group in the 1960s. C.P.R. telegraph pole insulators, a lamp from an old ship’s deck compass and other objects were collected from junk shops and flea markets on family road trips.  The drawing instruments, curves and scales are from his old drafting table and some of these he inherited from retiring colleagues over the years. And there are dozens of ancient pencils from manufacturers long gone. I still draw with many of these, remembering that my dad’s office and workbench was littered with old tools regularly used.

The thing I treasure most from him is learning from an early age to observe and really look at things, to always ask questions and to be patient.

Whether it was mountain climbing on the Olympic Peninsula or scaling the walls of the Hillside Mall for a climbing demonstration, Peter’s outlook on life was one of curiosity and exploration.

Growing up it could be a ‘borrowed’ log slipped from a boom in the Alberni canal to provide the means to drift on the outgoing tide to an overnight camping spot, with a passing tugboat providing the ride home. Later it was working on tugboats, flying about northern Alberta with oil exploration crews, and then deciding to pack everything up and head off with the family to Australia for a few years.

Family holidays were always adventures with meticulously planned hiking and camping expeditions into the back country, and road trips long and short to interesting and far flung locations. Logging roads held a particular attraction and after pouring over numerous Forest Service maps a variety of out of the way and unique places were discovered.

Peter brought patience and careful observation to what on the surface were unsolvable problems. How to get the family car off the ice patch on a high mountain road that had spun it around so that the nose was pointing at, and over, the edge into space, was to watch him think, ponder, look and then proceed with absolute calm that got the family back on the road.

He was at home on the water whether poking around Victoria’s inner harbour in his Easthope-powered skiff, on family and individual canoe trips, sailing through the Georgia Strait and the islands, fishing on the Juan de Fuca, or competing in Swiftsure and Cal 20 racing out of the Royal Victoria Yacht Club with sailing partner Ken.

He was a superb gardener and plantsman. Peter and Donna kept an extraordinary garden where any visit with friends and relatives began with a tour of new plantings and arrangements. In the workshop he was a collector of small interesting objects from firehose nozzles, to drawing instruments, an array of old pencils and ancient pen nibs that inspired his creativity and interest in crafting beautiful objects whether pottery, bird feeders, furniture, superb beer, wine, or boats.

Peter was an anchor for his three children. Growing up with all of the trials and tribulations of learning to navigate life, school, friends and relationships they knew no matter what or how badly they’d messed up, Peter was there to get them out of a jam, offer help and support. Equally, he was there to celebrate their successes and achievements. In all of life’s choices he was the one to ask the questions – the sensible practical and necessary ones – then whether it was choosing to take a round the world trip of self discovery, auto racing, or purchasing a derelict house for renovation, he was the first one there with practical advice and support. He always had their best interests at heart.

Do your best, be curious, ask questions, ask lots of questions, have fun and be happy which what you chose to do, that was Peter’s advice.

Peter is survived by Donna, his wife of 63 years, his three children, John, Graham and Gwen, daughter in-laws Robin and Jocelyn, grandchildren, Malcolm and Jeremy and great grandchildren Layna-Rae and Mya.

Donations in Peter’s memory can be made to the Junior Development Fund c/o the Royal Victoria Yacht Club. The fund promotes participation for junior members of the club in national and international yachting events. 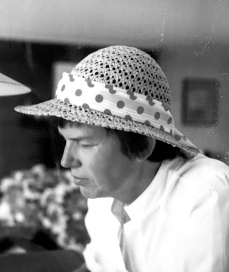 Donna: The things that remind me of my mother are less the artifacts but the memory of conversations and walks we took around the city. The walks were long strolls and the conversation was varied as her interests were wide and eclectic.

She was a stamp collector and stamps are here and there. When travelling I pick up old post cards and paper ephemera if there are interesting postage or tax stamps on them and I treasure a few sets given as gifts for their graphic qualities. I have a shelf of wind up toys and some of her small needlepoint pictures are on my office wall.

Small in stature, patient, quiet, yet incredibly strong willed and sometimes obstinate in opinion, Donna kept a keen sense of interest and curiosity about the world around her.

A prairie girl at heart with summers spent in Jumping Pound and the Rockies, marriage to Peter brought her to the coast. After a two year interlude in Australia, Victoria would become home.

Donna was always one to surprise. The f-word once uttered in teenage anger was met with a mild reprimand and a question about its etymology. Puzzled looks and embarrassment was punishment enough it seems. School administrators often met her strong will where she felt they’d overstepped their authority, famously admonishing one principal for an off the school yard cigarette related detention, “I think I’m in a better position to judge rather than you.”

Occasionally, though patience was tested to the breaking point, once ending with a plate thrown across the kitchen ( it missed ), but lesson learned. However, the kitchen was not off limits, help was welcomed and encouraged becoming informal cooking classes that have served all three children well over the years imparting a love of food and the act of creation.

Her quiet determination taught all three children to look at things from all sides and develop a strong sense of self.

Her love of craft was exhibited in beautiful and coveted sweaters for all of the family, precise needlepoint, weaving on her own loom, and later the building of her model railroad, flocking hillsides, constructing tunnel portals and buildings. She found delight in goofy wind up toys and puzzle games and was a mean puzzler taking hours at a time on a complex image.

The garden was a constant source of inspiration and relaxation. Donna and Peter kept an extraordinary garden where any visit with friends and relatives began with a tour of new plantings and arrangements. Peaches and plums from the trees were canned, apples sauced and raspberries and other fruit showed up on the table as preserves and jams.

Figure skating, German soccer and Grey Cup games were eagerly followed. Stamps were collected and the arrival of new releases eagerly awaited. Other stamps were solicited for community fund raisers and time was volunteered for community groups and Oak Bay’s Monterey Centre was a favourite haunt. Trained as a book keeper Donna worked for the George Pearkes Clinic, United Way and the Cancer Clinic.

Friends were cherished and for 30 plus years Marie and Sally were constant companions for walks and a stop for coffee. The tradition continued even as Donna moved to assisted living, something the family is grateful to both for.

Pre-deceased by Peter, her loving husband of almost 65 years, Donna is survived by her three children, John, Graham and Gwen, daughter in-laws Robin and Jocelyn, grandchildren, Malcolm and Jeremy and great grandchildren Layna-Rae and Mya.

2 thoughts on “We are shaped by those around us…”