Numerous guidebooks, research papers and reports have been written about Chinatown over the years and many of them talk about the buildings that feature the “typical cheater floor” or the “illegal cheater storey” built to “cheat” either the taxman or building inspector. It is inferred that this is something unique to the Chinatowns in Vancouver and Victoria.

It certainly fit with the idea that the Chinese were always up to something; prostitution, opium, gambling were common vices ascribed to the community and so cheating the taxman wouldn’t be all that unusual. However, a closer look at this idea shows there’s no cheating going on. 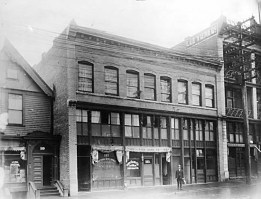 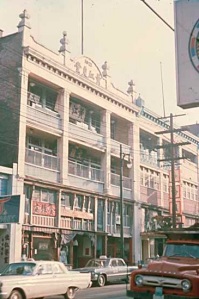 These two images show the Wong’s Benevolent Society building 123 East Pender. The original building owned by Mr. Francis (Frank) Hamilton was constructed in 1910 and clearly shows a typical Edwardian-era mezzanine floor. The second image shows the same building after the top floor was removed and replaced with the new floors of the Wong’s Benevolent Association. The mezzanine floor remains as part of the renovated and rebuilt structure.

The idea that this was something that only occurred in Chinatown ignores the fact that numerous buildings across the city from the Edwardian period, like Hamilton’s, had a mezzanine floor. It was where office staff, cashiers and book keepers sat. In Chinatown the floors had a variety of uses including recreation rooms for various societies and the typesetting room for the Chinese Times to name a few.

The idea that somehow the Chinese were cheating on their taxes with the hidden and illegal floor is silly because buildings in British Columbia have never been taxed on the number of floors but as they are today, land value and improvements. So no cheating there.

It would have been hard for these floors to be hidden and secret, because when the buildings in question were constructed the City had a permit and inspection system in place; and Chinatown was subjected to excessive inspections by all manner of civic agencies. As well, architects (Chinatown building owners employed major architects of the day) wouldn’t be risking their reputation by facilitating something illegal. The cheat also presumes that building inspectors and the taxman were blind since these floors aren’t exactly hidden away but nicely articulated in the building design.

So where did the “cheater floor” come from?

In the 1940s building inspectors did find some owners who had constructed living quarters in their buildings by erecting partitions on the mezzanine to rent to men in town from the canneries and logging camps. As these infractions were reported in the newspapers, the popular imagination took over and the floors became something notorious. And in the 1970s when one of the first comprehensive guidebooks to Vancouver was being compiled the term “cheater floor” and “cheater storey” is invented. The writer probably thinking that the illegal living arrangements meant the floors themselves were illegal.