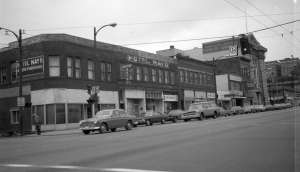 Here’s a shot of the corner of Main and Keefer showing the Hotel Mayo. The corner building dates from the 1890s and its neighbour is probably of the same era. This Vancouver Archives photo (CVA 447-308) shows both buildings before they were pretty much demolished and rebuilt as one structure using the original bricks which were wrapped around a new steel and laminated wood frame. Only a small portion of a back wall survived the rebuild.

The Hotel Mayo (with “modern furnishings”) was once the National Rooms in the 1940s and before that the Winnipeg Rooms. We will have a longer post on Changing City.