The Vancouver Heritage Foundation and the DVBIA unveiled the latest set of Places That Matter plaques on June 26, 2015. It was a great celebration. The five plaques focus on various aspects of the role West Hastings Street has played in the development of the city; finance, the port, parades, tourism and the early residents. As part of the unveiling I talked about the change the street has seen over the years as it moved from a residential street to one filled with office buildings.

Here’s the Vancouver Daily World in September 1912, reporting on the demolition of Richard Marpole’s house at Howe and Hastings. The image is of the house in 1910 hemmed in by the construction of the Metropolitan Building and the recently completed Winch Building.  The image is BU P556 from the Archives. 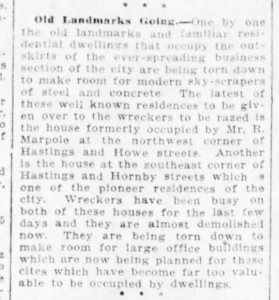