Declared a provincial historic area in the 1970s and a national historic district in 2011, Chinatown is recognized for its significant contribution to British Columbia and Canada. The Chinatown Gate, spanning Pender west of Carrall Street, welcomes visitors and Vancouverites to the district. The never ending parade of tour busses in the summer months attest to the area’s continuing impact on tourism in the city.

It is home to the cultural highlights of the Dr Sun Yat Sen Classical Chinese Garden, the Chinese Cultural Centre and the distinctive and unique Society buildings that line Pender Street. Within the neighbourhood you can still find the traditional retail of bbq shops, live fish stores and the fruit and vegetable stalls that animate the sidewalks.

It is, and should continue to be, “the vibrant centre of an evolving and enduring culture.”

The City of Vancouver’s recent proposals to revise the zoning in the district threaten its very existence as a place that “provides the vitality and living colour that gives Chinatown its distinctive character”. What the City of Vancouver zoning revisions reveal is a limited vision of what Chinatown is and could be.

Vancouver’s Chinatown reached its apex in the 1960s and 70s as new immigration reinforced the neighbourhood’s presence and fuelled its expansion. 40-plus years on there is no argument that Chinatown is changing. Chinatowns across North America face inevitable change with declining and aging populations, a lack of interest from younger generations in running traditional Chinatown-based businesses and the ever present development pressures.

Neighbourhoods and communities change and evolve. Nothing remains static. But there is change and then there is change.  While no one wants to see Chinatown preserved as a theme park-like environment (we come close enough with the dragon street lights, the ginkgo trees and the ‘village’ street-style sidewalk paving patterns) it should not be seen as an area ripe for wholesale redevelopment.

The 1886 Canadian Pacific Railway survey laid out the streets of the emerging city in a grid of 25 foot lots that reached across the downtown peninsula towards Kitsilano. This lot pattern gives the neighbourhood its rhythm of shop fronts and buildings built over three distinct periods from the years before the First World War, the 1920s and 30s, and the post war period of the 1950s through to the 1970s. Apart from a handful of larger structures the majority of buildings in Chinatown are 25 and 50 feet wide. That varied building pattern of frontages and heights is what gives the area its character and visual interest.

The revised zoning’s stated purpose to “provide greater capacity for new development and growth.” is at odds with the stated vision for Chinatown which is to create “a place that tells the history with its physical environment, a place that serves the needs of residents, youth and visitors, and a hub of commercial, social and cultural activities.” The revised plan should be focussed with an emphasis on retaining the variety of long established buildings and businesses, while creating limited incentives for demolition and encouraging incremental development such as that found on the north side East Georgia St. with the construction of the Flats and the Albert residential buildings.

The proposed changes acknowledge the significance of Pender Street’s built form and pattern of retail which makes up the core of the HA-1 zone, also the boundary of the National Historic District, and the revisions are reasonably sensitive to the street’s character. However, outside of Pender Street the plan initially appears to offer a finer grained approach for future development calling for street frontages to a maximum of 75 feet, while maintaining a maximum 50 foot shop frontage contained within a 90 foot height; there other welcome adjustments in building form and FSR. But read further and things don’t look so respectful. 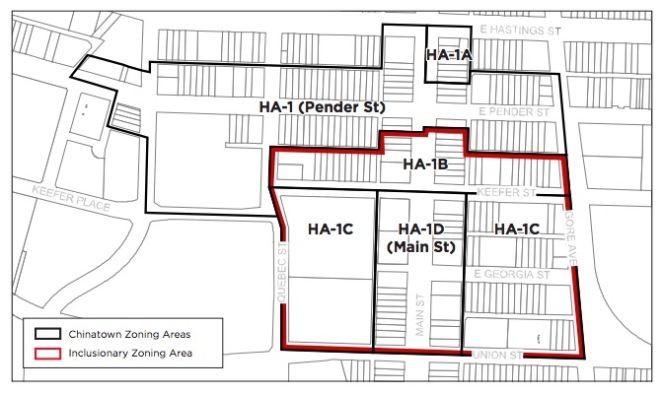 In the proposed inclusionary zoning area which covers everything south of Pender and overlays the new sub areas, developments can reach street frontages up to 200 feet – that’s eight lots, pretty much half a block – with heights up to 120 feet (150 feet in HA-1D). This set of bonuses, which apart from a small concession for the HA-1B sub area limiting the height and frontage bonuses to one development per block, and the western HA-1C that is occupied by a BC Hydro sub station and the Chinatown Plaza parking garage, threatens to wipe out the parts of the district which supports the necessary retail of daily life such as the fish and vegetable shops.

The retail frontage is still set at a 50 foot maximum but nowhere is there a mechanism in the plan to stop the consolidation of the retail space into larger entities. Already we’ve seen the detrimental affect of larger building footprints on the retail scene; a furniture store occupies all of the retail space under the Ginger condominium on Main Street, side-by-side banks on the west side of Main don’t exactly animate the street, and a restaurant only open in the evening, takes up all of the required storefronts on Keefer between Main Street and the lane. It’s hard to square this with the “notion of encouraging a more traditional mix of uses.”

And as the force of redevelopment is unleashed under this revision, how does the necessary retail of vegetable dealers, bbq meats and fish shops survive? None of these businesses will be likely to be able to afford the new rents let alone find a location to move to once they have been displaced.

The stated purpose for these zoning changes is to “provide greater capacity for new development and growth.” And yet at the open house the presentation highlighted that “Speculation [and] the pace of change is leading to unrealistic expectation on density, land speculation, and lot assembly in the area.”  This and the coming development pressures brought by the new St. Paul’s hospital and the Viaducts’ demolition were cited as reasons for revisiting the zoning.

If the zoning revisions were limited to the initial, non-inclusionary zoning proposals for each of the sub areas then Chinatown could stand a chance, but in today’s insane real estate market, the possibility of a 200 foot frontage coupled with an overall height (in most cases) of 120 feet makes bulldozer bait out of almost any building south of Pender Street. There won’t be the smaller scaled development that should reflect and enhance the existing building pattern, it will be an area out of scale and incompatible with the protected historic area (HA-1) and National Historic Site.

And to add insult to injury, if the current design guidelines are applied to the new developments, then we’ll have a terrible and inaccurate pastiche of Chinatown character pasted on to large out of scale buildings. The design guidelines really need updating or maybe they should be tossed out since they take the balcony, which is a distinctive design element found only on the Society buildings, and turn it into a required element to express “Chinese” character in the neighbourhood, a rather Western view of what a Chinese neighbourhood should look like.

Chinatown is a fascinating and frustrating neighbourhood and it is going through a transition brought on by the demographics of an aging population, new residents and new businesses attracted to the area. The original Chinatown Height Review was lacking and a review is necessary but the bonuses in return for seniors housing seem excessive and if the inclusion of seniors housing in the neighbourhood, an important and a laudable goal,  wipes out the area south of Pender, what have we ultimately achieved?

I’m quite concerned for my favourite neighbourhood.