The debate over 105 Keefer is an important one, not just because it’s a significant chunk of development on a critical site in Chinatown, but with the reimagined parkland and residential communities that will emerge from the North East False Creek planning program, this site will be a major gateway to the historic quarter.

Whatever gets constructed here must show respect and an understanding of where it is being built. The developers, unfortunately haven’t yet been able to grasp the importance of the context of where they are hoping to build.

The first scheme had one of the weakest set of design justifications ever – colours picked from a Chinese film. No matter how important the film was or is, it’s irrelevant to the site and to the larger context of Chinatown. The second scheme was equally silly as it pasted the Chinese Benevolent Society building facade over the face of the new structure and regardless of the detail and care of the homage it showed a complete lack of understanding of the origin and purpose of Chinatown’s unique society buildings. And the third scheme is, well the third scheme…

Today the contested site is an empty lot, though some will remember the former Texaco station that faced Keefer Street and Chinatown Memorial Square (the near invisible road that runs along the northern edge of the Square was installed to ensure access to the garage). Fewer will remember the Chinese Theatre which sat at the lane facing Columbia Street.

A Statement of Significance for this site would find that:

Heritage value for the site is found in the variety of business, social and cultural uses that have utilized Lot 23 over time. As a site on the edge of False Creek it was first used by the Palmer Brother’s for their hay, coal and wood business allowing easy water access for bulk deliveries while offering easy distribution to their clientele.

Social and cultural value for the site is found with the development of the Chinese Theatre which opened to great fanfare in 1916 at the northern edge of the site facing Columbia Street. The substantial 3-storey building designed by Chinese-Canadian architect W.H. Chow, reflected the growth and prominence of Chinatown with productions featuring noted Chinese actors and musicians. Considered one of the largest Chinese-run theatres outside of San Francisco it served as an important cross-cultural space hosting everything from revival meetings, local Japanese theatre productions, fund raising events for charity and political meetings. The theatre, active into the early 1960s, provided accommodation for Chinatown residents in the floors above.

The service station represents an emerging modern Chinatown and that:

Further social and cultural value of the site is found with the construction of the Texaco service station in 1935. Originally operated by Richard Chan, the station was purchased by the Lee brothers, Harry, Henry, Horace and Hubie. Hubie Lee served in WW2 with British Intelligence, trained in survival and guerrilla warfare tactics as part of Force 136. The service station faced Memorial Square and the Chinese monument.

It’s unfortunate that the site’s significant social and cultural history hasn’t yet informed the proposed development and that an opportunity to honour that history keeps being missed. Chinatown deserves better.

The Chinese Theatre is documented in a series of photographs from 1944 held by Libraries and Archives Canada taken by Jack Long and in this film held by the RCBM. 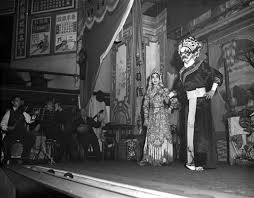 One thought on “Gone But The Significance Remains…”